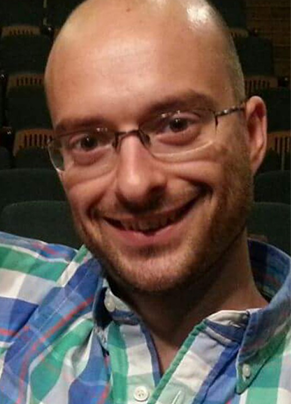 Meet The Sixteen's Daniel, an alto who can often be found drawing or playing table tennis

What do you do to relax in your spare time?
Relax?!? What’s that? I tend to be found drawing if I have a few hours to spare, and I always find time to get out to the gym. I’ll hopefully be playing local league table tennis next season!

If you could perform in any venue, what / where would it be?
Tewkesbury Abbey – it has one of the best acoustics!

Is there a piece you have fallen in love with since performing it with The Sixteen?
James MacMillan’s Miserere. I love singing James’s music – it’s always beautifully written, and more importantly it seems to come from a strong and profound faith. I’m always affected by music which appears to mean something to a composer.

What has been the most challenging piece of music you have ever performed?
In terms of notes, Poulenc’s Figure Humaine is not easy, but I’ll go for Bach’s Mass in B Minor. I find it challenging to perform well because it’s as close to a complete work of music as you can get, in my opinion, and it’s technically demanding on top of that.

Do you have a party trick and if so, what is it?!
Um…rescuing spiders?! Bit of a niche trick, that.

Who were you, or would you be nervous to meet?
I gave flowers to the Queen when I was seven – that was nerve-wracking! For some reason I get tongue-tied around famous sportsmen and women. I tried to congratulate (Arsenal Ladies and England footballer) Kelly Smith when I saw them win the FA Cup, and failed to speak.

What do you think you would be doing if you weren’t a musician?
A scientist or an artist. I’m fascinated by all things scientific, especially in the astronomy field. My mum trained as a microbiologist so I guess that runs in the family. I’d also, as a side career, be Arsenal and England’s star striker.

What would you eat for your last supper?
Sausage casserole using  Schwartz’s recipe mix – something I grew up with!

And the obligatory question…What football team do you support?!
Arsenal of course!!