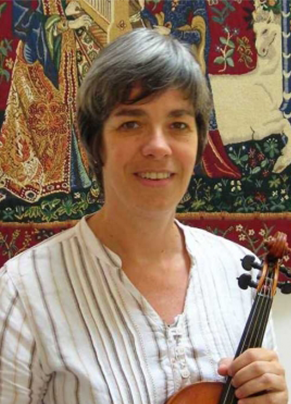 What’s been a memorable Sixteen gig & why?
The Christmas tour 2007! All our luggage went missing on a Spanish flight, so we had to perform the concert in our everyday clothes. The audience were told, and as we went onto the stage there was a buzz of excitement from them and we gave a really exciting performance of Handel’s Messiah!

What’s your favourite Sixteen recording?
I like the recording we did of Dixit Dominus (Handel). It’s one of my favourite Handel pieces.

Where did you train/study?
I studied at The Guildhall School of Music and Drama (79-83). I took up the Baroque violin after college and in 1985 got a place on the first European Baroque Orchestra Course, then held in Oxford for 6 months.

What are your hobbies and interests?
I have an interest in family history and have researched my own family name (O’Dell) back to 1698. It’s a Bedfordshire name and there’s even a village in Bedfordshire called ‘Odell’!

What else do you do (professionally) when not playing with The Sixteen?
I teach privately and I have a lot of adult pupils. I play chamber music whenever I can and have a chamber ensemble which perform a lot in Kent.

What football team do you support?
Hmmm! That’s tricky as I don’t follow football at all. I’m an Athletics fan and have very much enjoyed the Commonwealth Games recently!

Please tell us a little about your instrument.
I play on a violin made by David Rubio in 1987. It’s a copy of a Stradivarius and I bought it from my lovely teacher, the late Micaela Comberti.