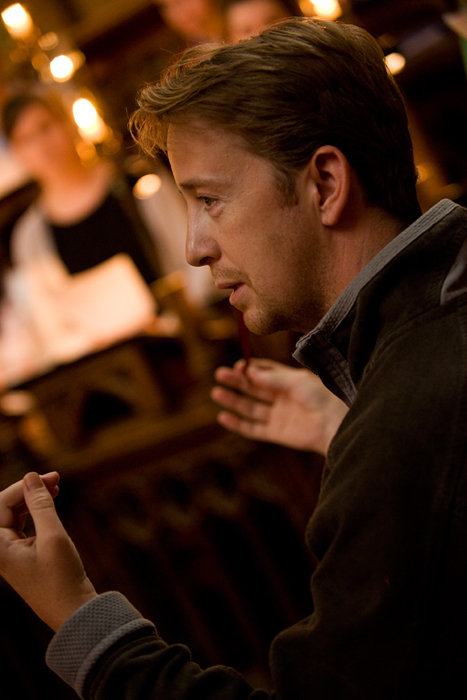 Eamonn Dougan is an inspirational communicator with a wide-ranging repertoire and is a renowned vocal coach and baritone.

He is Associate Conductor of The Sixteen, founding Director of Britten Sinfonia Voices, Music Director of the Thomas Tallis Society, and Chief Conductor for Jersey Chamber Orchestra.

Eamonn has conducted The Sixteen for many years, and recently directed a highly successful five-disc Polish Baroque series. The first disc, music by Bartlomiej Pekiel, was met with widespread critical acclaim and was shortlisted for a Gramophone Award (‘Richly dramatic’, The Observer; ‘A delightful performance’ BBC Music Magazine). Subsequent discs in the series include The Blossoming Vine, music by Gorczycki, and Helper and Protector. The fifth disc, music by Marcin Mielczewski, was released in 2017.

Recent highlights have included the world premiere of James MacMillan’s All the Hills and Vales Along at the Cumnock Tryst Festival, assisting Sir Mark Elder for the world premiere concert and recording of Puccini’s Le Villi with Opera Rara and the London Philharmonic Orchestra, and conducting the off-stage chorus for Berlioz’s L’Enfance du Christ with The Hallé, Britten Sinfonia Voices and Genesis Sixteen for BBC Proms 2019 at the Royal Albert Hall. In 2019 he directed The Sixteen’s highly acclaimed tour of Australia and Singapore, Messiah with Orquesta Sinfónica de Castilla y León and Cappella Amsterdam, made his Spanish debut with the Bilbao Orkestra Sinfonikoa and Real Orquesta Sinfónica de Sevilla, and in Paris at the La Seine Musicale with renowned ensemble Accentus and in Copenhagen with Danish National Symphony Orchestra, VokalEnsemblet and KoncertKor. Eamonn directed De Profundis on their Hyperion release Juan Esquivel’s Missa Hortus Conclusus to critical acclaim.