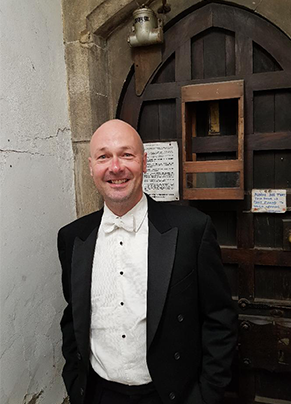 What’s been a memorable Sixteen gig & why?
The first ever CP gig in York Minster in 2000 where I was misguidedly given the responsibility of leading the choir on. I walked right across the front of the stage before ascending the risers whereas I should have climbed to the back first of course. Luckily nobody was stupid enough to follow me! My wife of just over a year, Rebecca Outram, was leading the Sopranos on and as she reached my position she just looked at me wryly and said, “Well done, Rob” in an eye rolling type of a way, which suggested she was beginning to realize what she had let herself in for!

What’s your favourite Sixteen recording?
La Gloire do Dieu. (I’m not on it, but just love the Poulenc Sept Responds de Tenebre.)

What else do you do (professionally) when not singing with The Sixteen?
Lots of other ensembles (invidious to mention them here), but most notably a Lay Vicar at Westminster Abbey (as Harry was!)

What football team do you support?
Manchester City, but not a huge fan of The Eastlands Project as I can’t see what association the team will have with Manchester or the grass roots game in England once Sheik Mansour & Garry Cook have finished with it. I preferred it when City was everyone’s second favourite side, (ie not a threat) rather than the villain of The Premiership, (as Chelsea or Man U should still be).